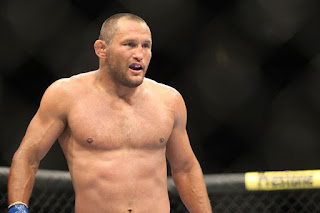 Dan Henderson continued his recovery from the loss of two championships by beating Rich Franklin in the main event of UFC 93.

Franklin’s middleweight title was not on the line, as the bout took place in the light heavyweight division.

With the victory, Henderson earned a spot as The Ultimate Fighter Season 9 coach opposite Michael Bisping.

Mark Coleman battled Mauricio “Shogun” Rua in rematch from PRIDE 31. Both men’s teams got into a brawl, and Rua scored the TKO win with 24 seconds left.

Rousimar Palhares picked up his seventh win in eight fights with a unanimous decision over Jeremy Horn.

Alan “The Talent” Belcher used a guillotine choke to beat Denis Kang in Round 2.
“The Irish Hand Grenade” Marcus Davis kicked off the pay-per-view with a split decision over Chris Lytle.

All of the preliminary fights ended with finishes. England’s John “The Hitman” Hathaway made his UFC debut with a TKO win over Tom Egan at the 4:36 mark.

Poland’s Tomasz Drwal came back from knee surgery and a 16-month layoff to knock out Ivan Serati at the 2:02 mark.

Dennis Siver returned to the Octagon to beat Nate Mohr with a spinning back kick, followed by punches for the TKO win in Round 3.
at September 09, 2018