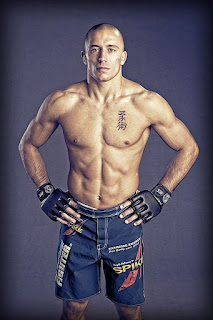 Georges St. Pierre bested BJ Penn in a battle of champions at UFC 94, but a greasing controversy clouded his victory.

GSP used an overwhelming ground-and-pound attack to defend his welterweight title against Penn, who tried to add the belt to his lightweight championship.

While Penn failed to continue after four rounds, he later sought an investigation into his claim that GSP was covered in too much Vaseline. While the decision stood, a new rule was enacted limiting the use of grease to a fighter’s face.

GSP also won his first meeting against Penn by split decision at UFC 58.
The co-main event was a battle of light heavyweights with 13-0 records. Lyoto Machida knocked out Thiago Silva with one second left in the first round.

In a battle of judo experts, Karo Parisyan returned from a back injury to face undefeated Dong Hyun Kim of South Korea. Parisyan won by split decision, but the result was changed to a no-decision when he tested positive for painkillers in a drug test.

Clay “The Carpenter” Guida opened the pay-per-view with a split decision over TUF 5 winner Nate Diaz.

In the reverse of UFC 93, all of the preliminary bouts went to the judges’ scorecards.
TUF fighter Dan Cramer’s first official pro bout took place in the Octagon, and he scored a split decision over Matt Arroyo.