UFC 95: Battle of the TUF Winners 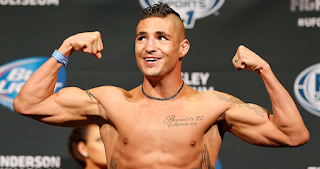 Diego Sanchez survived a bloody war with Joe “Daddy” Stevenson in the main event of UFC 95.

Sanchez, who dropped to the lightweight division, beat Stevenson by unanimous decision in a battle of The Ultimate Fighter winners.

An audience of 2.4 million watched the tape-delayed show on Spike TV.

In the co-main event, Dan Hardy knocked out Rory Markham in 69 seconds.


Nate Marquardt scored a TKO win over Wilson Gouveia in the third round, improving his chances at  another shot at middleweight champion Anderson Silva.

Terry Etim spoiled Brian Cobb’s Octagon debut with a TKO early in the second round.

Mike Ciesnolevicz subbed for Justin McCully, moved up to heavyweight and beat Neil Grove with a heel hook in 63 seconds.

In other pre-show fights, Evan Dunham knocked out Per Eklund of Sweden at the 2:14 mark; and Paul Kelly won a unanimous decision over Troy Mandaloniz