UFC 96: Rampage Jackson Called Out by the Champ 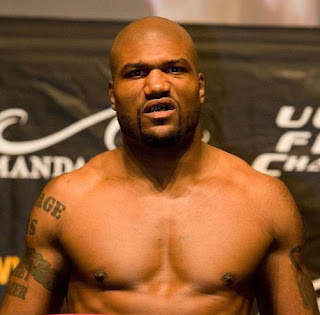 Quinton “Rampage” Jackson picked up his 30th career win by defeating Keith Jardine in the main event of UFC 96.

Rampage didn’t have to ask for a UFC light heavyweight title shot, as champion Rashad “Suga” Evans challenged him after the bout.

Shane Carwin (11-0) knocked out Gabriel Gonzaga in 69 seconds, but he would have to wait another year to get a shot at heavyweight gold in the UFC.

Matt “The Hammer” Hamill knocked out Mark Munoz with a head kick in 3:53. Ohio native “The Immortal” Matt Brown beat Pete Sell by TKO in 92 seconds.

In the pay-per-view opener, Gray Maynard remained undefeated with a unanimous decision over Jim Miller in a lightweight bout.

On the pre-show, Tamdan McCrory handed kickboxing standout Ryan “The Lion” Madigan his first pro loss by TKO at the 3:35 mark.

Shane Nelson defeated Aaron Riley by TKO, but Riley protested that the referee stopped the fight too early.

Brandon “The Truth” Vera used leg kicks to defeat Michael Patt by TKO in the second round.

In other preliminary bouts, Jason Brilz improved to 17-1-1 with a unanimous decision over Tim Boetsch; and Kendall Grove beat Jason Day by TKO in 92 seconds.