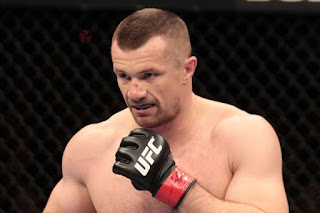 Rich Franklin and Wanderlei Silva earned a standing ovation at UFC 99 from the German fans, who were witnessing their first live UFC action.

Franklin is a former middleweight champion in UFC, while “The Axe Murderer” held that title in PRIDE.  On this night, they competed at a 195-pound catchweight, and Franklin won a unanimous decision.

Cain Velasquez (6-0) moved closer to a heavyweight title shot with a unanimous decision over Cheick Kongo, who had been enjoying a three-fight winning streak.

Mirko Cro Cop made “The Comeback” a successful one, beating Mostapha al-Turk in 3:06 after a two-year absence from UFC.

Spencer “The King” Fisher scored his third win in a row with a unanimous decision over Caol Uno, who was making his own comeback after six years away from the Octagon.

Dan Hardy opened the pay-per-view with a split decision over “The Irish Hand Grenade” Marcus Davis. Mike Swick defeated Ben Saunders by TKO in Round 2.


Lightweight pre-show bouts included Paul Kelly over Ronaldo Delgado by unanimous decision; German’s Dennis Siver on Dale Hartt with a rear naked choke at 3:23; and Terry Etim over Justin Buchholz by submission to a D’Arce choke in Round 2.