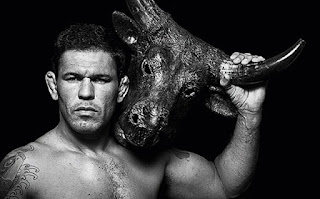 Randy Couture was unable to bounce back from his heavyweight title loss to Brock Lesnar, as “The Natural” lost the main event of UFC 102.

Antonio Rodrigo Noguiera scored a unanimous decision over Couture, who put up a great fight that brought the crowd to its feet.

In the co-main event, Thiago Silva knocked out “The Dean of Mean” Keith Jardine in 95 seconds.

Nate Marquardt avoided a ground battle with the undefeated Demian Maia by knocking him out in 21 seconds.

Brandon “The Truth” Vera opened the pay-per-view win with a unanimous decision over Krzysztof Soszynski.

On the pre-show, Aaron Simpson defeated Ed “Short Fuse” Herman in the second round.

Todd Duffee scored the fastest knockout in UFC history, knocking out Tim Hague with a left in seven seconds.