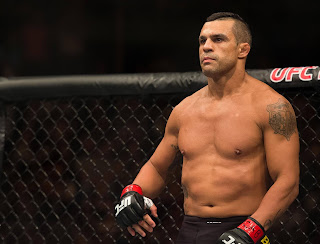 Vitor Belfort continued his timeless career by knocking out Rich Franklin at UFC 103.

Belfort, who made his Octagon debut at UFC 12 in 1997, hit Franklin with a big left to the jaw in just over three minutes. He made a triumphant return to UFC after a four-year absence.

“Once you get clipped, everything kinda goes blank,” Franklin said.

Mirko Cro Cop battled Junior Dos Santos in the co-main event. Junior prevailed in the third round due to Cro Cop’s eye injury.

Tyson Griffin opened the pay-per-view by knocking out Hermes Franca in Round 2.

Spike TV aired a pair of bouts before the pay-per-view. TUF 8 winner Efrain Escudero beat Cole Miller by TKO; and Tomasz Drwal beat Drew McFedries with a rear-naked choke in Round 2.

In other pre-show bouts, Jim Miller defeated Steve Lopez on a TKO due to a shoulder injury in Round 2. Rick Story used an arm-triangle choke to beat Brian Foster.

The judges did not agree at all on Elliot Marshall’s split decision win over Jason Brilz. Two judges scored the fight 30-27 for Marshall, while the other went 30-27 in favor of Brilz.