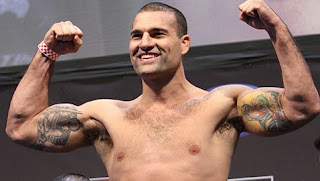 Lyoto Machida retained his UFC light heavyweight title against Mauricio “Shogun” Rua at UFC 104, but both men got the winner’s share of the money.

Although Machida won a unanimous decision with 48-47 scores from all three judges, UFC boss Dana White was apparently unhappy with the verdict.

According to Bloody Elbow, White cut Rua a check for $250,000 after the fight, so he could also be paid like a winner.

Cain Velasquez continued his climb up the heavyweight ladder with a TKO win over Ben Rothwell in Round 2.

Joe “Daddy” Stephenson forced Spencer “The King” Fisher to tap out to strikes in a lightweight bout.

The other two pay-per-view fights were bumped up to catchweights due to fighters coming in above the weight limit.

At 157 pounds, Gleison Tibau won a unanimous decision of Josh “The Dentist” Neer.

Anthony “Rumble” Johnson beat Yoshiyuki Yoshida by TKO in 41 seconds at a catchweight of 176 pounds.