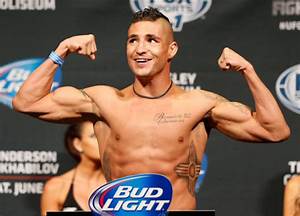 Penn became the first lightweight champion to defend the title three times. He busted open Sanchez’s forehead with a kick, and the doctor stopped the fight in the middle of Round 5.

In the co-main event, Frank Mir won a heavyweight clash with Cheick Kongo. Mir used a guillotine choke to score a technical submission in 72 seconds.

John Fitch won his 19th of his last 20 fights, scoring a unanimous decision over Mike Pierce.


Kenny Florian stayed strong in the lightweight division, beating Clay Guida by submission to a rear-naked choke in Round 2.

In the pay-per-view opener, Stefan “Skyscraper” Struve won his third fight in a row by majority decision over Paul Buentello.

In pre-show fights, Alan Belcher beat Wilson Gouveia by TKO in just over three minutes in a bout at a 195-pound catchweight.

Matt Wiman beat Shane Nelson by unanimous decision; and Rousimar Palhares beat Lucio Linhares by submission to a heel hook in the second round.

The other three pre-show fights took place in the welterweight division. Johny “Bigg Rigg” Hendricks improved to 7-0 with a unanimous decision over Ricardo Funch.

TJ Grant beat Kevin Burns by TKO just before the end of Round 1. DaMarques Johnson forced Edgar Garcia to submit to a triangle choke at the 4:03 mark.