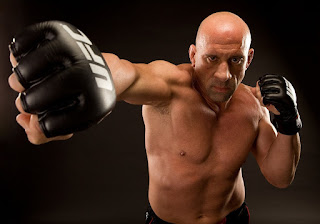 Randy Couture waited 12 years to fight Mark Coleman in the Octagon, and Couture came out on top at UFC 109.

The two Hall of Famers were originally set to fight at UFC 17 in 1998, but the fight was scrapped due to an injury. A dozen years later, Couture won by technical submission in Round 2 with a rear-naked choke.

Paulo Thiago scored a technical submission over Mike Swick with a D’Arce choke in Round 2.

Chael Sonnen also earned a shot at Anderson Silva later in the year by scoring unanimous decision over Nate Marquardt.

In the PPV opener, Matt “The Terror” Serra knocked out Frank Trigg at 2:23 for his first UFC win in three years.

In the early prelims, Chris Tuchscherer won a heavyweight battle with Tim Hague by majority decision. Joey Beltran defeated Rolles Gracie Jr. by TKO in Round 2.
at January 29, 2019