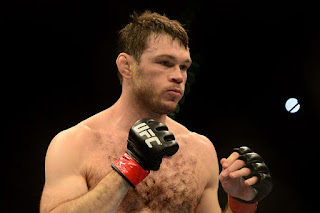 Forrest Griffin avenged his loss to Tito Ortiz at UFC 106 in a battle of former light heavyweight champions.

In the co-main event, Josh Koscheck forced  Anthony “Rumble” Johnson to submit to a rear naked choke late in the second round.

On the Spike TV prelims, Ben Saunders knocked out “The Irish Hand Grenade” Marcus Davis at the 3:24 mark. Kendall Grove forced Jake Rosholt to submit to a triangle choke in just under four minutes.

In the early prelims, George Sotiropoulos scored his fourth win in a row by forcing Jason Dent to submit to an armbar in Round 2.

Also, Brian Foster picked up his first UFC win over Brock Larson with a second-round TKO.

Fabricio Camoes fought Caol Uno to a majority draw. If Camoes hadn’t been penalized for an illegal upkick, he would have won the fight.