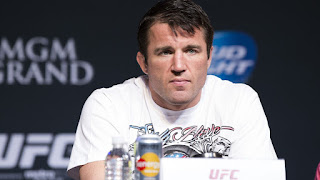 Sonnen dominated “The Spider” in the first four rounds and appeared to have the gold within his grasp.

However, Silva did what champions do: win when you least expect it. He forced the challenger to tap out with less than two minutes on the clock.


Clay “The Carpenter” Guida defeated Rafael dos Anjos, who could not continue due to a jaw injury in Round 3. Jon Fitch won a unanimous decision over Thiago Alves.

Junior dos Santos improved to 6-0 in the Octagon with a unanimous decision over Roy “Big Country” Nelson. Junior moved on to face Shane Carwin for a shot at the UFC heavyweight title.

On the pre-show, Rick “The Horror” Story defeated Dustin Hazelett by TKO in the second round.

Johny “Bigg Rigg” Hendricks maintained his perfect record (9-0) with TKO win over Charlie Brenneman in the second round.

In the heavyweight division, Stefan Struve knocked out Christian Morecraft in the second round to improve to 20-4.