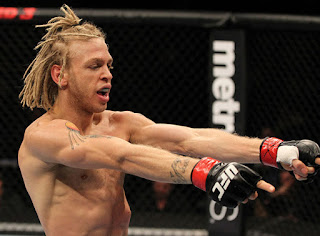 Jonathan Brookins won the lightweight tournament in the 12th season of The Ultimate Fighter.

Brookins won a unanimous decision over Michael Johnson to earn a UFC contract. He lost three of his next UFC fights before moving to India in 2012 to study yoga. He later returned to fight for other promotions around the world.

Georges St. Pierre and Josh Koscheck were the coaches for the season, leading up to a welterweight title bout one week later. Both finalists were on Team GSP.

Leonard Garcia kicked off the Spike TV telecast with a split decision over Nam Phan.

In the first bantamweight fight in UFC history, Nick Pace choked out Will Campuzano with 27 seconds left in the fight. David Branch won a unanimous decision over Rich Attonito.