UFC 121: Dethroning the King of the Jungle 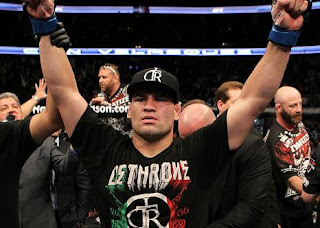 Cain Velasquez knocked Brock Lesnar off the top of the mountain, winning the heavyweight title at UFC 121.

The undefeated Mexican-American fighter weathered a storm of Lesnar’s takedown attempts and unleashed a flurry of strikes to win by TKO at the 4:12 mark.

In the co-main event, Strikeforce veteran Jake Shields won his UFC debut with a split decision over Martin “The Hitman” Kampmann.