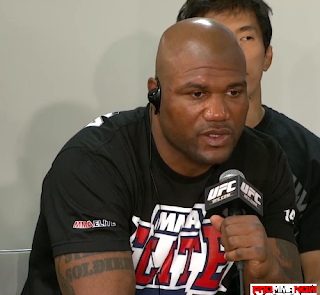 Rampage Jackson beat Lyoto Machida by the slimmest of margins in the main event of UFC 123.

UFC was visiting Detroit for the first time since UFC 9 in 1996.

Phil “Mr. Wonderful” Davis used the kimura lock to force Tim Boetsch into submission in Round 2.

George Sotiropoulos opened the pay-per-view with a submission win over Joe Lauzon in Round 2, also using the kimura.

On the Spike TV pre-show, Mark Munoz beat Aaron Simpson by unanimous decision.  Brian Foster defeated “The Immortal” Matt Brown with a guillotine choke in Round 2.

In the early prelim fights, Nik Lentz remained unbeaten in the UFC with a split decision over Tyson Griffin. Edson Barboza won his UFC debut over Mike Lullo on a third-round TKO with leg kicks.