UFC 124: Hail to the Hometown Hero 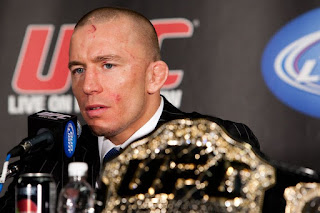 Montreal embraced Georges St.-Pierre at UFC 124, as more than 23,000 fans watched him retain the UFC welterweight title against Josh Koscheck.

GSP won their first battle three years earlier by unanimous decision at UFC 74, and this fight ended with the same result.

All three judges gave the fight to the champ with identical 50-45 scorecards.

UFC raked in $4.6 million at the Bell Centre box office.

Stefan “Skyscraper” Struve won the co-main event with a TKO win over Sean McCorkle at the 3:55 mark.

In a battle of The Ultimate Fighter winners, Mac Danzig knocked out Joe “Daddy” Stevenson in less than two minutes. Jim Miller won his sixth fight in a row, beating Charles Oliveira with a kneebar at the 1:59 mark.

Thiago Alves opened the pay-per-view with a unanimous decision over John Howard.