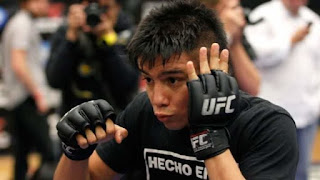 Anderson Silva retained the UFC middleweight title for the eighth time, beating Vitor Belfort in the main event of UFC 126.

Silva floored “The Phenom” with a front kick, and finished him off with a punch combination at the 3:25 mark.

Jon "Bones" Jones moved into position for a light heavyweight title shot, beating Ryan Bader with a guillotine choke in the second round.

Jake Ellenberger won a strange split decision over Carlos Eduardo Rocha. Two judges scored the fight 29-28 for Ellenberger, but the other judge thought Rocha won every round.

Miguel Torres kicked off the pay-per-view with a unanimous decision over Antonio Banuelos. Both fighters were debuting in UFC after the merger with their home promotion, WEC.

On the Spike TV pre-show, Donald “Cowboy” Cerrone won his Octagon debut over Paul Kelly. Cerrone used a rear naked choke to win the fight in Round 2.

In the early prelims, Paul Taylor knocked out Gabe Reutiger with a head kick in the second round