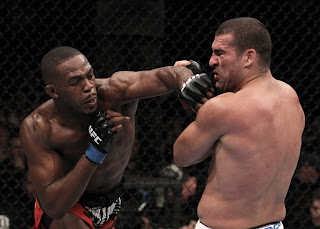 Jones, 23, used knee strikes and punches to score a TKO victory in Round 3. Josh Barnett was the previous record holder, winning the UFC heavyweight title at the age of 24.

In a battle of former WEC champions, Urijah Faber scored a unanimous decision over Eddie Wineland. Both men debuted, as UFC beefed up its lighter divisions with talent from the WEC merger.

Jim Miller scored his seventh win in a row, beating Kamal Shalorus by TKO in the third round. Nate Marquardt beat Dan Miller by unanimous decision.

Brendan Schaub knocked out the legendary Mirko Cro Cop in Round 3 of the pay-per-view opener.

Eric “New Breed” Koch knocked out Raphael Assuncao in a win so impressive, UFC aired the fight on Spike TV and the pay-per-view.