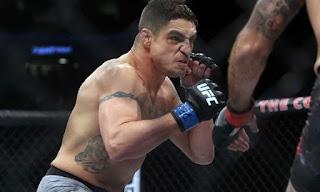 Diego Sanchez won a bloody war with Martin “The Hitman” Kampmann  to headline the third UFC show on the Versus network.

All three judges scored the fight 29-28 for Sanchez, who busted Kampmann open and was also bleeding under both eyes.

Brian Bowles won the TV opener over Damacio Page with a guillotine choke at the 3:30 mark. Three years earlier in WEC, Bowles beat Page with the same move in the same amount of time.

In the early preliminary fights, Rousimar Palhares used a kneebar to beat David Branch in the second round.

Igor Pokrajec beat Todd Brown by TKO just as the first round ended. Shane Roller knocked out Thiago Tavares in the second round.