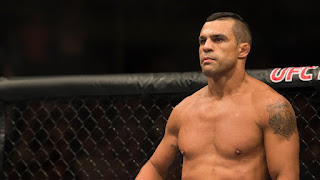 Rashad “Suga” Evans beat Tito Ortiz in the main event of UFC 133, after the two men fought to a draw four years earlier.

Evans was supposed to challenge Jon “Bones” Jones for the light heavyweight title, but the champ’s hand injury meant he would have to wait eight more months for his title shot.

Ortiz stepped in to fill the void, even though he had just fought at the previous month’s PPV. Evans won by TKO in the second round.

Vitor Belfort bounced back from a loss to Anderson Silva by knocking out Yoshihiro Akiyama at the 1:52 mark.

Rory MacDonald opened the PPV with a win over Mike Pyle by TKO at the 3:54 mark.