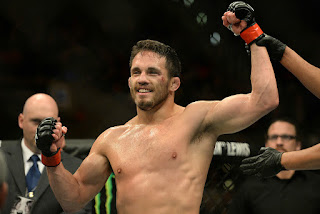 Jake Ellenberger moved up in the welterweight division with a decisive win over Jake Shields at UFC Fight Night 25.

Shields won his fifth fight in a row, living up to his “Juggernaut” nickname with a TKO victory in 53 seconds. Check it out.

Shields was unable to bounce back from a loss to Georges St. Pierre in a UFC welterweight title fight less than five months earlier.

Court McGee, who won Season 11 of The Ultimate Fighter, won a unanimous decision over Dongi Yang.

Alan Belcher beat Jason “The Athlete” MacDonald by submission in the Spike TV opener at the 3:48 mark.

On the Facebook pre-show, Vagner Rocha used a rear naked choke to beat Cody McKenzie in the second round. Evan Dunham won a unanimous decision over Shamar Bailey.

TJ Waldburger used a triangle choke to beat Mike Stumpf at 3:52. Seth Baczynski beat Clay Harvison with a rear naked choke in Round 2.