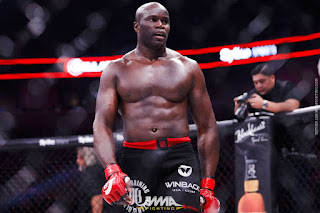 Cheick Kongo survived a near-knockout to KO Pat Barry in the main event of UFC on Versus 4.

On two occasions, the referee could have stopped the fight in favor of Barry.  At one point, the announcer says, “It’s over.”

But Kongo kept getting up and rallied for the biggest comeback win of 2011.

Watch the amazing finish for yourself.

“The Immortal” Matt Brown snapped a three-fight losing streak with a unanimous decision over John Howard.

Heavyweights opened the TV show, as Matt Mitrone knocked out Christian Morecraft in the second round.

Joe Lauzon forced Curt Warburton to tap out to a kimura in just under two minutes. Rich Attonito won a unanimous decision over Daniel Roberts.

In a controversial bout, Charles Oliveira appeared to defeat Nik Lentz by submission to a rear naked choke. However, the decision was changed to a no-contest due to an illegal knee strike by Oliveira.