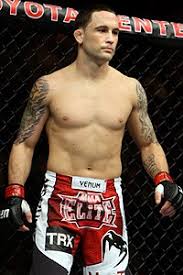 Frankie Edgar won his trilogy over Gray Maynard to retain the UFC lightweight title at UFC 136.

Maynard won their first meeting in 2008, making him a natural challenger for Edgar’s title on New Year’s Day 2011. That bout ended in draw.

In the third bout, Edgar overcame Maynard’s challenge with a TKO in the fourth round.

Joe Lauzon opened the pay-per-view with a 47-second win over “The Young Assassin” Melvin Guillard via rear naked choke.


Stipe Miocic debuted on the Facebook pre-show. He beat Joey Beltran by unanimous decision to improve his pro record to 7-0.