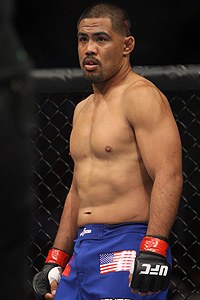 When the UFC comes to Birmingham, England, Chris Leben is in the main event. However, Mark Munoz defeated him at UFC 138.

Leben lost to Michael “The Count” Bisping when the Octagon debuted in Birmingham at UFC 89 three years earlier.

Munoz, known as “The Filipino Wrecking Machine,” won the middleweight matchup when Leben’s corner stopped the fight after the second round.

UFC 138 was live on SportsNet in Canada but taped for Spike TV that evening in the U.S.

In the co-main event, Renan Barao defeated Brad “One Punch” Pickett with a rear naked choke in 4 minutes, 9 seconds.

In a fight that would be the main event in any zoo in the country, Anthony “The Hippo” Perosh defeated Cyrille “The Snake” Diabate in the second round.

On the Facebook pre-show, Phil De Fries of England won a unanimous decision over Rob Broughton. John Maguire won in the same manner over Justin Edwards.

Chris Cariaso won a split decision over Vaughan Lee in the bantamweight division.