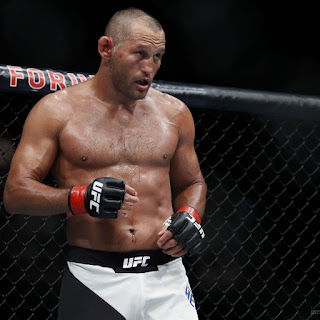 One of the greatest fights in UFC history saw Dan Henderson triumph over Mauricio “Shogun” Rua at UFC 139.

All three judges saw the fight 48-47 in Henderson’s favor, and nearly everyone who watched the fight called it a classic.

UFC President Dana White called it “one of the top three best fights ever in MMA.

In the co-main event, “The Axe Murderer” Wanderlei Silva knocked out Cung Le in Round 2.
Uriah Faber used a guillotine choke to beat Brian Bowles in the second round.

Stephan Bonnar opened the pay-per-view with a unanimous decision over Kyle Kingsbury.

On the Facebook pre-show, Chris Weidman beat Tom “Filthy” Lawlor by technical submission to a D’Arce choke at the 2:07 mark.

Seth Baczynski beat “The Immortal” Matt Brown by submission to a guillotine choke in the second round. Danny Castillo beat Shamar Bailey by TKO with eight seconds left in Round 1.
at April 06, 2020