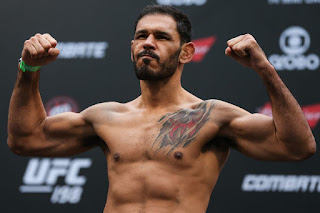 Jon Jones added to his sterling resume as UFC light heavyweight champion with a win over Lyoto Machida at UFC 140.

Jones succeeded in his second title defense, beating “The Dragon” by technical submission to a guillotine choke in Round 2.

Frank Mir broke the arm of Antonio Rodrigo “Big Nog” Noguiera, who refused to tap out to a kimura. The referee stopped the fight at 3:38, as Big Nog was unable to avenge a previous loss to Mir.

Little Nog (Antonio Rogerio Noguiera) had a much better night than his twin brother, defeating Tito Ortiz by TKO at the 3:15 mark.

On the Facebook prelims, Mark Bocek won a unanimous decision over Nik Lentz.

Jake Hecht debuted with a TKO win over Rich Attonito in Round 2. John Cholish beat Mitch Clarke, also on a second-round TKO.
at April 13, 2020