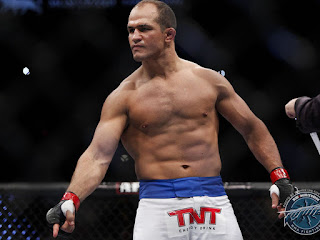 The company was celebrating its 18th birthday with its first show on Fox.

Junior improved to 8-0 in the Octagon as he dethroned Velasquez, who was making his first defense of the title he won from Brock Lesnar one year earlier.

This was the only fight on the Fox TV show, so fans watching UFC for the first time only saw about a minute of action. The other nine fights aired on Facebook.
Benson Henderson earned a shot at the lightweight title with a unanimous decision over Clay “The Carpenter” Guida.

Aaron Rosa won a strange majority decision over Matt Lucas. Two judges gave Rosa a lopsided 30-26 victory, while the other saw the fight as a 28-28 draw.

Robbie Peralta seemingly defeated Mackens Semerzier by TKO in Round 3. However, the decision was changed to a no-contest due to an accidental headbutt.

Ricardo Lamas defeated Cub Swanson by submission to an arm triangle choke in the second round.

Dustin “The Diamond” Poirier beat Pablo Garza with a D’Arce choke in the second round.
at April 02, 2020